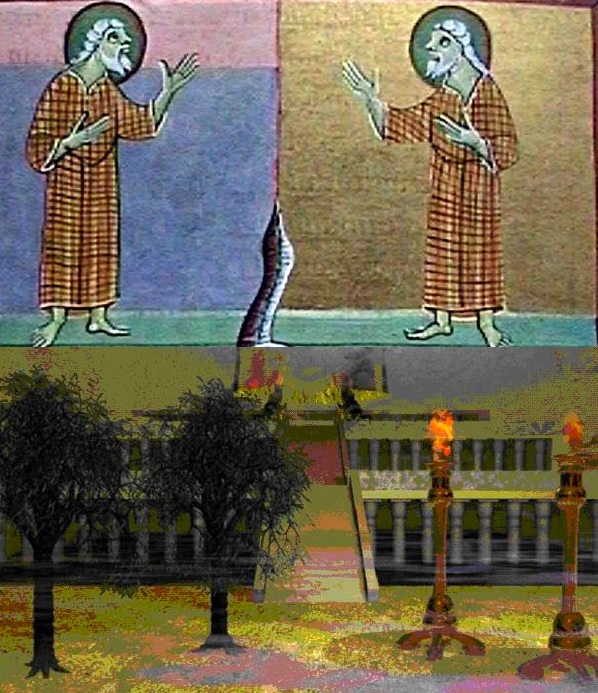 This, our 16th post in our journey through Revelation, explores chapter 11 devoted to the Two Witnesses. A video recording of this will be available on the Shofar Durbanville Youtube channel.

In chapter 10 John was invited to take and eat the scroll containing God’s redemptive purpose, to embody God’s redemptive plan on earth.  The chapter concludes with John’s commission to prophesy – to participate in the Lamb’s redemption of creation by being a witness of God’s renewal of all things.  Chapter 11 continues with a vision of two witnesses, depicting the identity, purpose and destiny of the church in the Lamb’s renewal of all things.

This is a complex chapter, rich in symbolism from the Old Testament, but very helpful in understanding the role of the church in a wicked world.  To simplify the reading of the chapter, we will focus on three questions this chapter answers about the church: 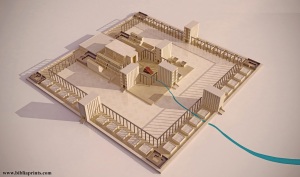 A living temple. “After this”  John was sent to “measure the temple, the altar and those who worship there” (11:1). By the time of John’s writing, the temple in Jerusalem had been destroyed for more than 20 years – so the temple refers to the church (1 Corinthians 3:16; 6:19; 1 Peter 2:5 etc.). This “man measuring the temple with a rod” is a clear allusion to Zechariah’s vision (Zechariah 2:1 – 5).  Here in John’s vision there are no measurements given; what matters is that measures are taken. The temple, altar and worshipers are “measured” or counted because they matter to God.  The promise of peace and protection in Zechariah 2:5 is the intended message to John’s readers: “I will be to her a wall of fire all around, declares the Lord, and I will be the glory in her midst.”  God has measured his people, and not a single one will be lost (compare chapter 7 where God’s servants are “sealed” for protection).

Vulnerable yet Invincible.  However, “the outer court” should not be measured, for it would be “trampled upon for 42 months” (11:2), “1,260 days” (11:3) – or 3½ years (“time, times and half a time”). 42 is significant in apocalyptic genre, because it is an important number in Israel’s history.  For example, 42 is the number of stages in Israel’s journey through the wilderness toward the Promised Land (Numbers 33).  42 months is the period that Elijah had stopped the heavens from raining to bring the nations to repentance (1 Kings 17; James 5:17). Matthew’s genealogy is portrayed in three sets of 14, amounting to 42 generations, showing that the birth of Jesus marks the end of waiting for Israel’s Messiah (Matthew 1).  Therefore, 42 represents the fullness of time in any stage of redemptive history.  For the readers of Revelation, 42 represents the period we live in – the time allowed for the nations to come to repentance, between the cross and Christ’s return.  Darrel Johnson writes:

“42 months represents the period of time from the day Jesus Christ constituted the new temple by the shedding of his blood, until the day when the new city without a temple, the city which is a temple, comes down out of heaven” (Discipleship of the Edge: An expository journey through the Book of Revelation; Regent Publishing: 2004)

In putting verses 1-2 together we see that the church is measured and protected by God’s seal until the Day of Judgment, but will be resisted and persecuted by secular nations until that time. We are simultaneously invincible and very vulnerable in this age – “like lambs in the midst of wolves” (Matthew 10:16).  Why then are we here?

This vision of lamp stands and olive trees is an allusion to Zechariah 4:1-6.  In that vision, the olive trees provide unending oil to the lamp stands to show the enduring power of the witnesses during these hardships is “Not by might, nor by power, but by my Spirit, says the Lord of hosts.” (Zechariah 4:6)  The oil that provide light to the witnesses is the fellowship of the Holy Spirit. (Compare with the parable of the five wise/foolish virgins in Matthew 25:1-13).

Why two witnesses and not just one?  In Jewish law a charge can only be verified by two or more witnesses (Deuteronomy 19:15).  Many commentators feel that these two witnesses represent God’s elect in both old and new covenant; both faithful Israel and the faithful church display the just, peaceful and joyful reign of God to the nations.

Why witnesses? Who is on trial?  Not the church, nor the world is on trial here, but Jesus is.  Jesus who claims to be the Christ, the Son of God, sent to reclaim God’s reign as rightful ruler over all kingdoms and dominions.  For that claim Christ was killed, but rose again.  The church is God’s witness that Christ is risen and therefore his claims are vindicated – that “Jesus is Lord!” (Romans 10:9).  That’s why the world hates and quiets the witness of the church, because it rejects Christ’s claims of lordship.

These witnesses are said to prophesy with power like Elijah (1 Kings 17-18) and Moses (Exodus 4-11).  The miracles of these ancient prophets were signs to God’s claim as Sovereign Lord over Egypt, Israel and the nations, and these witnesses are said to bear similar signs to validate their witness of Christ’s Lordship.   They witness in and against Sodom, Egypt and Jerusalem “where [the] Lord was crucified” (11:8).  Here Sodom represents immorality, Egypt injustice and oppression, and Jerusalem false religion.

Note that these witnesses are dressed in sackcloth (11:3), representing a witness in repentance and humility, not superiority and power.  The witness of the church is a life of repentance and humility towards God.  Yet those who do them harm will be consumed by fire from their mouths (i.e. the wicked will be condemned before God’s Judgment by the very words of the witnesses they resist).

Death and resurrection. These witnesses are killed by the “beast that came from the bottomless pit.”  (Verses 7-14 foreshadow events that will be described in chapter 13).  Note that the beast kills the witnesses – that Satan is their real enemy, not people (Ephesians 6:12).  They are said to be dead for 3½ days (a relatively short period of time).   The nations rejoice at their death because the testimony of the witnesses trouble them, and dishonour the witnesses by refusing to bury their bodies.

Ironically, the people who bring this Gospel, the good news of freedom to the world are hated and killed for it. But like their Lord they are also resurrected for all to see (11:11-12), resulting in a cosmic shaking that kills many (11:13; compare with 6:9-17).

The glorious vindication.  After this, the seventh trumpet is blown (the final judgment), with the angel declaring the final victory of the Lamb over the nations in this world.  The praise “The kingdom of the world has become the kingdom of our Lord and of his Christ, and he shall reign forever and ever” is the phrase of Handel’s Messiah’s famous  Hallelujah Chorus.

In Revelation 10 we see John’s commission to prophesy/ witness his redemption of creation through embodied witness of God’s redemption.  In chapter 11 those who are called to witness are assured of the Lord’s protection but also warned of the world’s persecution.  The two witnesses are said to testify of Christ’s Lordship  from his coming, undergo hatred and suffering, until he returns to judge the world.

This rich and emotive chapter reveal three existential truths about the identity, purpose and destiny of God’s church on earth.

Identity: Who are we?  The church is God’s community of Spirit-empowered people.  We are empowered to witness the Lordship of Jesus both through powerful signs and miracles, as well as a life of continual repentance, resulting in progressive submission to God.  Both these shine the light of God’s kingdom in our world, calling our neighbors to submit to God.

Purpose: Why are we here?  The church is here to witness the reign of Christ.  We cannot be faithful witnesses until we make peace with the fact that we may be hated and hurt because of the message we herald.  Our lives cannot remain the most precious thing to us – our lives are given us to to be poured out (Philippians 2:17; 2 Timothy 4:6).  As such we are called to die, to “pick up our cross daily” and follow Him, to “present our bodies be living sacrifices” (Matthew 16:24-26; Romans 12:2).

Destiny: Where is this all leading?  God’s redemption of creation will result in his victory over the nations, the judgment of sin and the renewal of all things.  His saints will be vindicated and rewarded, and God’s enemies destroyed.  He will unveil his new temple – his church – and we live with him in his benevolent reign forever.