The age-old war between the dragon, the woman and her offspring is our focus in this 17th study through Revelation, stopping at chapter 12 today. A recording will be uploaded to Shofar’s Youtube channel.

If Jesus is victorious, and Satan is defeated, why are things in such a bad way?  This was the question that rung in the minds of the oppressed believers in John’s day – the question that gets answered clearly in chapter 12.  The first half of the Revelation focused on the reality of the church (ch 1-3), God’s throne room and Christ’s unfolding reign played out on earth (ch 6-11).  Chapter 12 reveals the cosmic battle in heaven which results in the chaos on earth and persecution of the saints.

You will note again in this chapter that Revelation is not a chronological roll-out of God’s redemptive plan, but in various ways depicts the church’s struggle with evil throughout history.  Although chapter 11 concludes with a picture of the 7th trumpet as God’s Final judgment and victory in the end, chapter 12 revisits the origin of this battle starting in Eden, in Bethlehem and Jesus’ ministry.  But this time the struggle is shown from heaven’s perspective.

Three characters are introduced in this sign: the woman, the great red dragon, and the male child.  Who are they?

The woman is said to be clothed in the sun, the moon at her feet, having twelve stars around her head – an allusion to Israel in Joseph’s dream (12:1; Genesis 37:9).  But there is more: this woman “gave birth to a male child, one who is to rule all the nations with a rod of iron” (12:5; compare Psalm 2:9) – representing Mary, the mother of Jesus.  Furthermore, the dragon wages war with the woman and her offspring – an allusion to the curse on the serpent in the garden of Eden and Eve (12:17; compare Genesis 3:15).  And lastly, we read that this woman’s offspring are “those who keep the commandments of God and hold to the testimony of Jesus” (12:17)– meaning that the woman also represents the church.

The woman here in Revelation 12’s first sign simultaneously represents Israel, Mary, Eve and the church – God’s redeemed Kingdom people throughout the ages.  This is another depiction of the Lamb’s army or 144’000 from every tribe, tongue, people an nation depicted in Revelation 7. 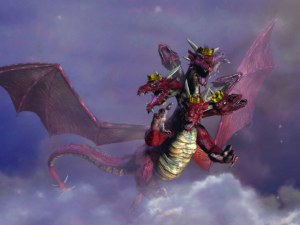 The Red Dragon is “great”, with seven heads, seven horns, seven diadems and a large sweeping tail – a picture of full strength and reign.  This dragon is “the ancient serpent” of Eden, named “the devil and Satan, the deceiver of the whole world” (12:9).  In the chapters to follow we will see that the Dragon is the source of power behind the beasts (all that is oppressive and intimidating), Babylon the great prostitute (all that is sensual and seductive), and the False Prophet (all that is deceptive).  The Red Dragon symbolises all that is oppressing, seducing and deceiving God’s people. 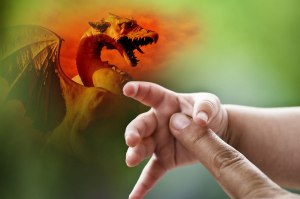 The Male Child is the man Jesus, the Son of God, “one who is to rule all the nations with a rod of iron… [and] was caught up to God and to his throne” (12:5, compare with Psalm 2:9 and Acts 1:9).  This is not meant to be read that Jesus was taken away as a child, but these things are said so that we may know his identity and the identity of the Woman. The focus of this drama is on the battle between the Dragon and the Woman.

The drama describes how the Dragon wants to “devour” the male child at his birth, hinting to the great infanticide of boys by Herod the Great in Bethlehem after Jesus’s birth (Matthew 2:16).  Satan’s lethal pursuit of Jesus is seen during his wilderness testing (Matthew 4:1-11), but most vividly when “Satan entered Judas” (Luke 22:3), to sell him out to his executioners.  Yet Christ conquered the worst the Dragon could do to him and ascended to heaven.  With the Child seated on the Throne, the Dragon’s vengeance is directed at the Woman who had “fled into the wilderness” (12:6).

The wilderness is said to be “a place prepared by God, in which she is to be nourished for 1260 days” (12:6).  This is an allusion to Elijah, God’s prophet, against the wicked king Ahab and his sorceress wife Jezebel, who announced God’s judgment of drought on Israel’s rebellion against his rule (1 Kings 17:1).  Elijah was hidden and nourished by God in the wilderness for 3½ years, which equals 42 Jewish months or 1260 days (1 Kings 17:2-16; compare James 5:17).  As with all the numeric values in apocalyptic genre, this should not be read as a literal duration of time, but as symbolic.  Paul Spilsbury says

“They – 1260 days, 42 months and a time, and times, and half a time – don’t tell us anything of the literal duration of the time of the ‘tribulation’, but what the tribulation will be like.” (The Throne, the Lamb & the Dragon: A Reader’s Guide to the Book of Revelation, Intervarsity Press : 2002)

I explained in the previous post why the period of 1260 days represents a season for the fulfilment of God’s redemptive purposes on earth.  As in the case of Elijah’s wilderness hide-out, the Woman’s 1260 days in the wilderness after the Child’s ascension represents the time required for God’s purposes on earth to be fulfilled.  Gordon Fee concludes on this number:

“In apocalyptic literature such numeric imagery refers to a time of national distress. John now is using it to point to a limited time of suffering on the part of God’s people which precedes the coming of the glorious kingdom of God.” (Revelation, New Covenant Commentary, Cascade Books : 2010)

In plain language, “1260 days in the wilderness” speaks of the Church’s preservation in her suffering during the time of God’s redemptive judgment on the kingdoms of the world.  This period began at Christ’s ascension and will conclude at his return.

Times of trouble.  This drama shows that this period is marked by trouble for the church, and the sustaining grace of God, as her place is being prepared.  This image of God’s sustenance of his people in the Wilderness awaiting their full salvation, is also an allusion to God’s covenantal faithfulness to Israel during their Exodus journey towards the Promised Land (compare “two great wings of an eagle” in 12:14 with Exodus 19:4).  This wilderness period for Israel was characterized by God’s protection and provision, but was not free from trials, tribulation and temptation.  Likewise the church’s time on earth is marked by Christ’s victory over sin and slavery, yet not free from the presence of intimidation, seduction and deception.

The cosmic conflict.  In verse 7 the vision moves from what takes place on earth to what takes place in heaven (similar to the transition between chapters 1-3 and chapters 4-5).  The drama shifts from Christ’s work on earth to the battle culminating in his victory played out in heaven.  This is depicted as an angelic battle, wherein Michael the archangel dispels Satan.  Six times John reaffirms this scene describing the cosmic conflict wherein Satan has been “thrown down”, a result secured “by the blood of the Lamb” (12:11).

Why the hardship? At this point the early church should have interrupted the reader of John’s message and asked the logical question: “If the Dragon has been defeated, why is the church suffering so much?”  John’s vision answers this question next, describing the “wrath” and “fury” (12:12, 17) which the Devil lashes out in his vengeance against the Woman who bore the child. He is angry “because he knows that his time is short” (12:12) – he will be thrown into the lake of fire forever (20:10).  He is angry because the Dragon’s domain is shrinking as Christ’s Kingdom Gospel is spreading (Matthew 16:19; compare Luke 10:17-20).  And therefore he persecutes the Woman who finds shelter in the wilderness.

Satan’s Schemes. How does the Dragon wage war on the Woman? This chapter reveals his strategies as accusation, deception and violence/ murder.  The word for Satan means accuser.  Accusation drowns the believer in guilt, causing him to feel discredited, disheartened and defeated.  Without confidence before God the believer will not witness and might even walk away from Christ. Secondly the Dragon deceives believers, luring them away with lies – either through temptation or false religious ideas.  Thirdly, the Dragon vengefully persecutes through violence, intimidating the church into fleeing and trying to find shelter in caves because of the threat of pain and death.  These images of the Great Dragon’s schemes would have been very relevant to the early church, even as it is very relevant to the church today.

Defeating the Dragon. John’s vision inspires and instructs the church by showing them those believers in God’s throne room who “have conquered him by the blood of the Lamb and by the word of their testimony, for they loved not their lives even unto death.” (12:11)   They overcame accusation by the blood that washes away all sins, giving a clear conscience before God (Hebrews 9:14).  They overcame deception by their testimony that Christ is risen, having conquered death (Matthew 28:6; 1 Corinthians 15:8ff). They overcome the threat of violence and the love of pleasure by following Christ’s example of enduring all for the prize set before them (Hebrews 12:1-3).

In chapter 13 this drama is depicted in greater detail, unveiling more of the church’s struggle on earth.

We are right to ask the question the early believers struggled with: If Jesus is victorious, and Satan is defeated, why are things in such a bad way?

This apocalyptic vision describes our context by unveiling the reality of Satan’s vengeful pursuit of Christ’s church. Satan is angry because he is losing his domain and his time is short.  It helps us to understand that we live in this period where God’s redemptive grace gives a measure of protection and provision to the church, while opening a door for the nations to turn to him through his redemptive judgments.

The comfort in this vision is that the Dragon’s time for vengeance is short, but the church’s victory is eternal.  The challenge in this vision is that Satan is behind the voices of accusation, the seduction of pleasure and power, the fear of pain and death. There is a Dragon lurking, “looking for someone to devour. [Therefore,] resist him, standing firm in the faith, because you know that the family of believers throughout the world is undergoing the same kind of sufferings.”   (1 Peter 5:8-9)

25 thoughts on “The End? The dragon, the woman and the boy”