In this 10th session in our series of Revelation, John is invited to “come up here” and see God’s throne room, and view life from his perspective (Revelation 4).   A recording of this will be made available at Shofar Durbanville’s Youtube channel.

Revelation 4 starts with the phrase “after this” – after the first part of the vision of Christ among the seven churches, addressing each of them with a specific word of comfort and correction (chapters 1 – 3).  Then John looks up – shifts his perspective from down here on earth to what is going on in heaven.  He sees “a door open in heaven” and is invited to “come up here” – to gain Godly perspective on the chaos and conflict the church endures on earth, and to identify with the Sovereign reign of God.

Imagine this! The only instruction the reader receives in this chapter is to “behold” (4:1,2) – to imagine this or picture this.  John invites the reader twice to see what he sees – because this hopeful message to the church is contained in the vision of what takes place in heaven.  John sees a throne, the Ruler, and the response of those around the throne.

A Universal Throne (4:2).  As he entered the door, John sees a magnificent throne. The early church was familiar with a throne over many peoples and nations – and that was not good news to them. Emperor Domitian’s reign (like those before him) was egocentric and brutal.  But this throne John sees was universal over all of creation – he was the true King of kings and Lord of lords who Domitian claimed to be.  The throne was not the problem – the one who sits on the throne determines whether his subjects will weep or rejoice.  And this is what John sees next. 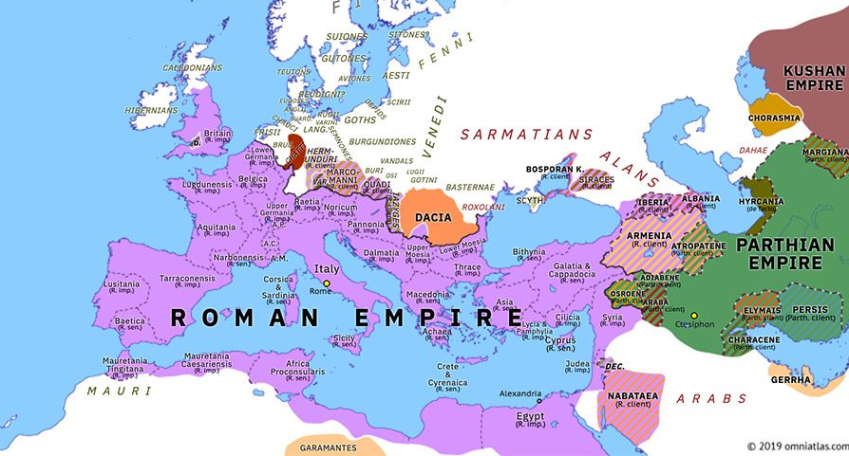 A Regal Ruler (4:3-5). The first thing John notes of “him who sat” on the throne, is the beauty – “the appearance of jasper and carnelian.” (4:3a)  Jasper is a transparent stone, like a diamond, conveying the image of clarity, perfection, flawlessness – justice and righteousness. Carnelian is a red, translucent stone like ruby, carrying the image of love, sacrifice and mercy.  John sees this ruler as righteous and abundant in loving compassion.  Indeed, His “kingdom is ruled by justice and fairness with love (mercy) and faithfulness leading the way.” (Psalm 89:14, CEV)

Secondly, John sees “a rainbow, appearing like an emerald.” (4:3b)  The rainbow, the sign of God’s covenant with Noah and all life, is God’s reminder to himself to never again destroy all life on earth with a flood (Genesis 9:8-17).  John sees God’s throne encapsulated in goodness and faithfulness, preserving life. God’s reign is “good; His lovingkindness is everlasting, and His faithfulness endures to all generations.” (Psalm 100:5)

Thirdly John describes “around the throne were twenty-four thrones, and seated on the thrones were twenty-four elders, clothed in white garments, with golden crowns on their heads.” (4:4) Unlike the egomaniac Domitian, this graciously humble Ruler chooses to share his reign, to include others to rule with him over his entire realm!  In this apocalyptic genre, the 24 elders imply the fullness of God’s covenant people of the Old and New Testament (12 tribes of Israel, 12 disciples/ apostles of the church). God’s renewed people reign over his creation, as the offspring of Adam and Eve were always meant to rule and reign with him (Genesis 1:26-28; Revelation 5:10).

Next, John notes “flashes of lightning, and rumblings and peals of thunders” (4:5) coming from the throne. This phrase appears three more times in Revelation when God pours out judgment on the peoples (8:5; 11:19; 16:18), and it draws from Exodus 19:16 where God gave the Law to Moses atop Mount Sinai.  Therefore, here as elsewhere in Scripture (e.g. Psalm 77:18 and Hebrews 12:18), the flashes of lightning and peals of thunder from heaven refers to God’s perfect justice and judgment.  Judgment has a negative connection in our day, but God’s fair punishment is excellent news when you’re oppressed – like the church was in the first century.  Moses sang “His work is perfect, and all his ways are just. A God of faithfulness and without iniquity, just and upright is he.” (Deuteronomy 32:4)

God judges with complete knowledge and wisdom, as the next image that John describes reveal.  John sees “seven torches of fire, which are the seven spirits of God” – an allusion to the 7-fold lampstand in the Tabernacle (Exodus 25:31-40) and 7-fold Spirit of God (Isaiah 11:2), implying that God sees all and knows all; his judgment is true and right. Unlike the ruler Domitian who ruler the great Roman Empire at the end of the first century AD, John caught a glimpse of this Universal Ruler who is righteous and merciful, good and faithful, graciously humble, perfectly just and all-wise.  Then John notes the response of those around the throne.

A Proper Response (4:6-9).  When John looks around the throne of God, he first sees a sea “of glass, like crystal.” (4:6)  In the ancient world, the oceans were regarded as mysterious, menacing and full of monsters; seafarers would frequently disappear into the unknown depths of the sea, never to appear again.  The sea (4:6) here represented the worst of John’s world: that which is uncertain, dangerous, and out of control.  But suddenly he sees that, from the perspective of this Regal Ruler’s throne, even the seas are at peace and crystal clear.  The higher your viewpoint, the calmer the waters.  From God’s perspective, nothing is out of control, nothing is mysterious, nothing is dangerous.  All is well, and there is no need to be anxious. 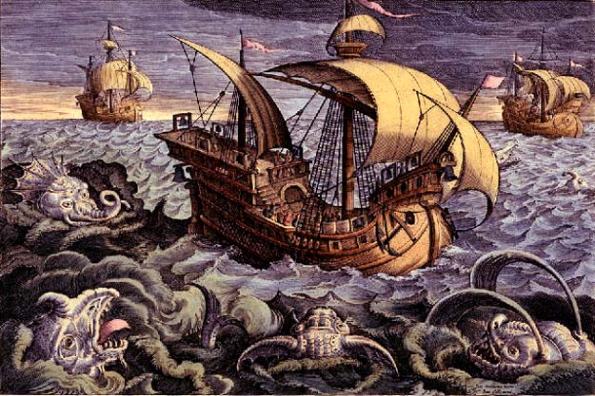 In ancient literature the seas were synonymous with menace, mystery and monsters. 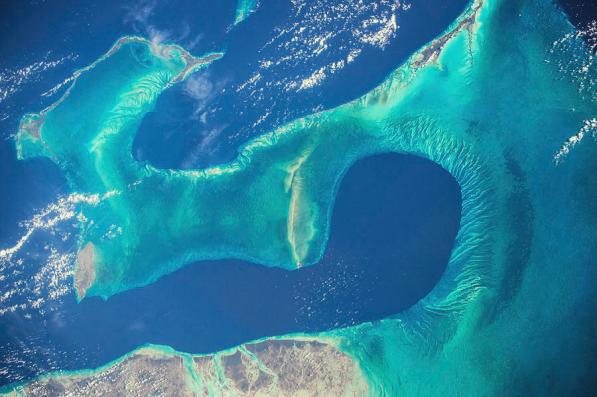 Satalite photo over Bahamas, clearly revealing what is below the waterline

John then describes the complete surrender of the 24 elders around the throne: every time the four impressive beasts praise God, the elders bow down, casting their crowns and declare “Worthy are you, our Lord and God, to receive glory and honour and power, for you created all things, and by your will, they exist and were created.” (4:11)  The elders recognize that all creatures and all powers are subject and subservient to God, created to serve his purpose.  And, rightly so, subject themselves to willingly serve him.

John was confused by the chaos and conflict that the church suffered – where was the reign promised by Christ?  After being assured that Christ is among his church and fully aware of what was happening on earth, John is invited to see God and look at creation from God’s perspective (ch 4, continuing in chapters 5-20).

John invites us to see that there is a door open to heaven where One is seated on his Sovereign Throne.  John comforts us that this One can be trusted to reign over all: he is described as righteous and merciful. Good and faithful, graciously humble, judging with complete wisdom and perfect justice.   When we become aware of the power and presence of his reign, we are filled with peace and awe, prompting praise and surrender.

How do I respond?  Whenever the cares of the world and the chaos of our day overwhelm me, in prayer, I choose to walk through that door to the throne room of God and imagine what John saw.  I see him for who he is and allow peace and praise to strengthen my heart that I may entrust myself to His sovereign plan.

The next post (on Revelation 5) will start to answer the questions that this vision begs us to ask: If God is in control, why do evil persist in the world?  And how does Christ’s reign fit in the chaos and conflict of our world today?

25 thoughts on “The End?A Throne set in Heaven.”