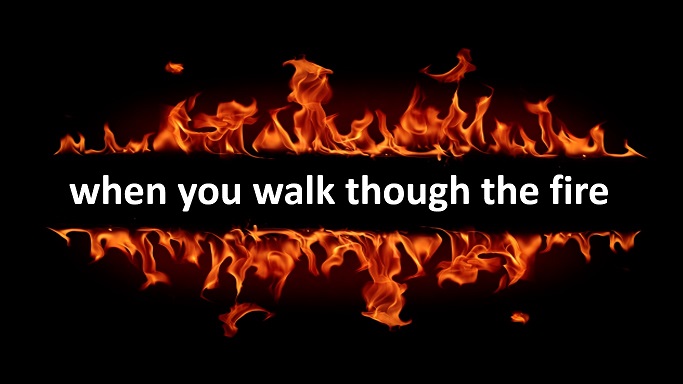 It’s the beginning of a new year, and we are reminded often of the good plans God has for us – “plans to prosper and not to harm us, to give you a future and hope.” (Jeremiah 29:11).  But what do we do when God’s plans include walking through the fire? 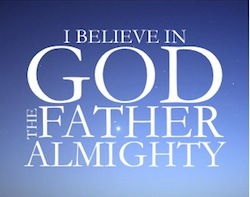 “I believe in God, the Father Almighty.” This first line of the Apostolic Creed is fundamental to the Christian faith (Hebrews 11:6): the belief in a God for whom nothing is impossible, and God who is a loving Father who has our best interests in heart.  In this God we trust.

Yet this great truth is the problem for many devout believers who sincerely trust in God for something – healing, provision, breakthrough at work, peace in a relationship – but God does not come through.   Over and over we affirm that God is almighty and good, and that he hears our cries and answers our prayers – but then a loved one dies, your company folds and finances dwindle or marriage ends in divorce court.  Or your desires are unmet in spite of all the promises you received, and you start another year lonely, or childless, or frustrated at work.  What do we make of these situations?  How do we relate to a loving, Almighty Father that allows for the suffering of his children?

The cause of suffering

As mentioned in a previous post Suffer Well, suffering has two basic behavioral consequences in a believer.

Firstly, he/she may gravitate towards doubt of self, leading to unhealthy introspection, believing that the suffering is either a result of God’s punishment for sin or some “open door” through which Satan has access to hurt us.  Job’s friends believed this and accused him of secret sin. (Yes, “sin leads to death” (James 1:15) and yes, our God “disciplines those he loves” (Proverbs 3:11-12; Hebrews 12:5-6), but like a good father he warns beforehand and makes it clear what you are being corrected of – his aim is correction)).

Secondly, the one suffering may doubt God’s character or ability, leading to accusation, that either God is unjust (as Job did) or unable to save. This can escalate to agnosticism or even atheism.

However, the Bible contains a myriad of godly characters who has undergone suffering – neither because of their sin or God’s unfaithfulness.  These accounts were recorded during times of hardship “for our learning… encouragement… [and] hope” (Romans 15:4) during similar circumstances.  One such helpful recording is of Daniel’s three friends who refused to bow down and worship a statue which emperor Nebuchadnezzar erected (see Daniel 3:14-30).  By their own declaration these godly men believed “our God is able to deliver us from the burning fiery furnace, and he will deliver us out of your hand…” (v17).  Yet they ended up in the fire; God did not prevent them from suffering.  What can we learn from this account of the three Jews in Babylonian exile 530BC?  How does it encourage us or give us hope in our own suffering?

God is not the author of suffering and death

As illustrated in this account, God is not the one who initiates suffering and death – the pagan king was.  God’s character and desire for his creation is clear in the Genesis creation account (Genesis 1 and 2) – there was no death, sickness or suffering until the fall.  We see this also in the promised re-creation of the New Heaven and New Earth (Revelation 20 and 21) where again “death shall be no more, neither shall there be mourning, nor crying, nor pain anymore, for the former things have passed away.” (Revelations 21:4). God is the author of life; Satan is the author of death and destruction (John 10:10). Since the fall of creation sin in our hearts and our world will result in pain, suffering, sickness, and death.  This is exactly why Jesus came – “to destroy the works of the devil” (1 John 3:8) so that mankind may again “have life more abundantly” (John 10:10).  God is not the author of suffering, but he is drawn to our suffering to redeem mankind from it.

A good life does not save us from suffering.

As seen in our text, a good moral life does not prevent us from suffering.  In fact, even a devout godly life does not protect us from all harm as we see in this account of Shadrach, Meshach, and Abednego who refused to worship idols, and yet were thrown in the fire.  A casual glance at Biblical and church history will assure you that good people suffer – in spite of their godliness and often because of their devotion to God.

God enters into our fire.

Suffering believers often feel abandoned by God.  The question asked many times “Where is God when it hurts?” is clearly answered in this account of Daniel’s friends: God enters the fire to be with his people in their suffering and strengthen them.  This is clearly demonstrated by Christ’s incarnation: Jesus became man to identify with us in our suffering (Mark 8:31; Luke 9:22; Hebrews 4:15) and to ultimately bring an end to the suffering brought about by sin and Satan (Revelations 21:2-5).

And still today Jesus is “Emmanuel – God with us” (Isaiah 7:14) who will “never leave us or forsake us” (Hebrews 13:5).  Especially during hardship the Psalmists sings “The Lord is near to the broken-hearted” (Psalm 34:18).   No amount of suffering, pain, death or loss – “Nothing can separate us from the love of God in Christ” (Romans 8:38).  God enters our fire – we never suffer alone.

Our suffering has purpose

Why does a loving God then allow suffering? If he is with us in our suffering, why does he not simply save us from it?  The mocking Jewish elite asked this same question to Jesus hanging on the cross 2000 years ago (Matthew 27:41-44), but Jesus endured it because he knew there was purpose to his suffering (Hebrews 12:2) – the salvation of the world!

Our text shows us that the suffering of the three righteous men at the hands of Nebuchadnezzar also had purpose, and we find hope that our suffering has the same three benefits.

Firstly, we note that their suffering lead to their immediate promotion (Daniel 3:v30).  This is a pattern in the Bible – the one who suffers well is promoted directly after his/her suffering.  Think of Job who was double as wealthy after his loss (Job 42:10), Joseph who became ruler over Egypt after his imprisonment (Genesis 41:41-44), David who was crowned king after his persecution (2 Samuel 5:3), Peter who became leader of the early church after his “shaking” (Luke 22:31-32 and Acts 2:14), and Jesus who earned the title “King of kings, Lord of lords” through his obedient suffering (Philippians 2:8-11 and Revelations 19:6).

As mentioned in a previous post Suffering your good tutor we can rest in the truth that “Nothing irredeemable can happen to a Christian” – or as Paul said it “all things work together for the good…” (Romans 8:28).  For the Christian who hold onto God in Christ, regardless of what you are going through, you are better off afterwards – both in this life and the life to come.  Suffering well always lead to promotion.  Nothing we encounter can put you back – God can turn every situation around for your good and his good.

Secondly, the suffering of the three friends of Daniel functions as an amplifier of their witness of and faith in God, so that everyone knew them and was attracted to them after the suffering to hear and investigate their story (Daniel 3:27; refer Philippians 1:13).  Their faith in God and faithfulness to him drew the attention of the king and his governors.  Furthermore, because of God’s preservation and presence in the fire, the king issued a decree that no one may “speak anything against the God of Shadrach, Meshach, and Abednego” (Daniel 3:29) for fear of their life. Effectively, their faithful, hopeful suffering lead to the honoring of Israel’s God throughout the vast Babylonian Empire, by the King’s decree.  Because they suffered well, the name of God was known and held in honour throughout the fast Babylonian empire; in other words, their suffering was part of God’s plan of salvation of the world. Joseph discovered the same after his imprisonment and promotion – what his brothers intended for evil, God intended for the preservation of millions of souls from widespread famine (Genesis 45:5-8).

Throughout the ages, the blood of the saints has been the seed of the church.  In other words, the faithful, hopeful suffering of God’s people has lead to the salvation of millions of souls throughout the ages.  Likewise your suffering amplifies the witness of your faith in God and lends credence to your message of hope in God – if you suffer while trusting God and remaining faithful to him.

Thirdly, as in the case of the godly martyrs who endured Nebuchadnezzar’s fiery furnace, suffering helps one grow in the knowledge of both yourself and God.  Trying times helps one discover the end of yourself and you realize how much you need the Lord’s grace to survive the fiery ordeal, as Paul realized (2 Corinthians 12:9). This produces a beautiful humility.

But suffering also helps one grow in intimacy with God like never before, as we see in this rich example of the three Jewish martyrs who experienced Jesus “walking in the midst of their fire” with them (Daniel 3:25).  Suffering forces one to draw near to God with no pretense, and the result is an honest perception of who God is, as Job discovered (Job 42:5).    This intimacy with God leads to uncharacterized confidence to pursue the impossible, because you have come to know the power and faithfulness of God through your hardships.

In closing, there are three take-home messages from this story in Daniel 3.

We find comfort in the truth that God will never forsake us – especially not during hardship!  “I am with you when you go through the fire… you shall not be burned, the flame shall not consume you…” says the Lord (Isaiah 43:1-2). But don’t isolate yourself, don’t walk through the fire alone – “God is among His people” (Revelation 21:3).

We find hope that our suffering has meaning, it has purpose – God makes “all things work together for good, for those who are called according to his purpose.” (Romans 8:28)  You will be better off after this suffering than you were before it!

Lastly, this story makes us consider and prepare our hearts: can we say with these three godly men “our God whom we serve is able to deliver us from the burning fiery furnace … but even if not… we will not serve your gods…” (Daniel 3:17-18).  They knew God could save them, but God said no.  Jesus pleaded his Father to make a way around the cross, but God said no (Matthew 26:39, 42).  Paul pleaded the Lord to save him from his torment, but the Lord said no (2 Corinthians 12:8-10).  David trusted his Shepherd to lead him “through the valley of the shadow of death” (Psalm 23:4) – will you?  Will you serve God when the he says no and you must walk through the fire?