“Now those who were scattered because of the persecution that arose over Stephen traveled as far as Phoenicia and Cyprus and Antioch, speaking the word to no one except Jews. But there were some of them… who on coming to Antioch spoke to the Greeks also, preaching the Lord Jesus. And the hand of the Lord was with them, and a great number who believed turned to the Lord.” Acts 11:19-21

This account by Luke is so simple and challenging at the same time: Christians fled Jerusalem due to persecution and suffering after Stephen the first martyr died at the hands of the Jews.  As they fled, they gladly shared their new-found faith with the Jews in every city and town they went through.  But in Antioch these Christians for the first time shared the gospel of Jesus with Greeks, “pagans”, and many believed.  And thus the most influential church in the first century was birthed – the church in which Paul grew into the apostle we know, and the church from where he and Barnabas was sent as missionaries to the gentiles.

So fearful, fleeing, young Christians “accidentally” planted the most influential church in the first century.

This could have been me and you.  Better still – it can be me and you.

When I think about the first church-plant I was involved in, this Scripture comes to mind, because on all accounts we were as clueless as the young Christians mentioned above.  We were young, passionate, inexperienced and without formal theologically education. But like them, we knew Jesus and his Gospel.

The birth of Shofar Pretoria

In 2002 a hand-full of young working Christians who used to be part of Shofar Christian Church in Stellenbosch found themselves in Johannesburg and Pretoria, longing for the vibrant worship, tight-knit fellowship with honest accountability in which the Holy Spirit freely ministered.  After a few months of prayer and a purposeful visits from the leaders in Stellenbosch there was agreement that the Holy Spirit mandated a church plant in Pretoria.

Today, more than thirteen years after the first service in the small, dark Moonbox Theatre in Sunny Side, Shofar Pretoria is a vibrant, multi-generation, missional church that has been key to the salvation, healing and discipleship of hundreds of individuals, as well as the planting of several other congregations in the North of South Africa.

I intend to tell the story in another blogpost, but in the next six posts I wish to share the lessons learned as we planted Shofar Christian Church in Pretoria.

Nothing will happen without someone taking initiative, without someone person taking the risk.  If a church is going to be planted, somebody, or some group of people, needs to do it.  This requires leadership, and leadership requires belief not just in the necessity and feasibility of the cause, but also in his/ her own ability to facilitate and coordinate the activities required for a life-giving church wherein people will forever be transformed through the powerful working of the Spirit and Word of God.  You need to believe that your mortal activities will lead to the eternal, salvivic consequences of yourself and others.  The proverb is true: “As a man thinks in his heart, so is he.” (Proverbs 23:7).

For me that shift to what I call “confident humility” happened when I was a student.  I was studying for another re-write of some notoriously difficult engineering subject.  On a coffee break, walking back to the study hall contemplated the quote “there is a God, and I am not him!” [see the inbedded clip below].  In that moment this truth settled in my heart and gave me such a freedom from the pressure of “making something happen” and delivered me from of the fear of failure!  God exists – so not everything depends on my effort.  Yet at the same time, this God lives in me and works through me.

In that moment a song was planted in my heart:

I know my Redeemer – the Almighty God

His Spirit will guide me in all of my days

Lord Jesus – it’s you that I praise!”

Confidence grounded in God – his omnipotent power, faithful and benevolent character.  Humility founded in my limited abilities, dependability on God’s providence, always with a sober awareness of my fallibility.  So liberating!

“I said you are the leader”

During my student years in Shofar Stellenbosch we had plenty of opportunities to grow into responsibility, allowing for character and skills development though ministry opportunities such as campus outreaches, small group leading, personal ministry facilitation such as emotional healing and deliverance, leading prayer meetings, and short term mission outreaches.  All with oversight and coaching – each opportunity allowing for discipleship growth in a safe environment.  In preparation of one of those summer mission trips myself and a friend Antoinette Woods (nee Bosch) were assigned to lead the 6-week GO!SA evangelism and ministry tour around the borders of South Africa.  Upon hearing the news I was struck with the paralyzing feeling of utter incompetence, much like Gideon of old (Judges 6:14-15).  While spilling my feelings to God in my room I remember the Lord clearly saying “Read Genesis 1”.  As I read aloud I came to verse three and heard the Lord say to me “I said ‘Let there be light,’ and there was light. Now I say to you “You are the leader!” and that you are!”  God assigns and creates capacity and provides grace with the appointment.  That day something shifted in my heart – eradicating fear and insecurity pertaining to leadership and ministry.  I was young and inexperienced, but I knew that when God sets one aside for leadership or another assignment, he provides grace to complete the task.  You are never left to you yourself – His grace is sufficient for all he calls you to. 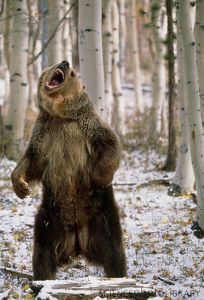 “The Lion and the Bear”

So when the principle pastor of Shofar Christian Church, Fred May, asked me in 2002 if I would lead the church plant in Pretoria I felt like David who said to King Saul before facing Goliath “Your servant has struck down both lions and bears, and this uncircumcised Philistine shall be like one of them” (1 Samuel 17:36).  I had a reference for God’s grace at work in spite of my human inadequacies.  I have gained confidence in seeing what I have accomplished, and grown in humility as I have come to know “it was not I, but the grace of God that is with me” (1 Corinthians 15:10).

Confidence in the face of opposition

After the commissioning in Cape Town I returned to the prayer group in Pretoria and announced that I have been commissioned to lead the church plant.  The news was met with mixed feelings, and some of the older members of the group resisted and outright rejected the decision, saying “you are too young” or “you have not been in the church long enough”.  Some left the church plant initiative during that time.  Amazingly, those conflicting moments and combative statements did not shake my heart the least, although I knew that the statements were true – I was young, I had limited experience in ministry, I studied engineering and not theology.

Yet, I knew what God had said to me previously.  I knew I was not perfect, I was not God – but I knew God, and I knew he is for me and with me.  I knew I was called to plant the church, and I knew that it did not all depend on me – I knew the “Christ in me, the hope of glory” (Colossians 1:27).

Today, after more than thirteen years the church in Pretoria is still flourishing and growing at the hands of Phillip Boshoff and the team.  Truly I can witness that God gives grace to the humble, and that those who know their God will accomplish great things. So let your faith be in God, not your expertise, experience or effort. After all,

In the next post we will consider the second lesson I learned – The blessing of being clueless.